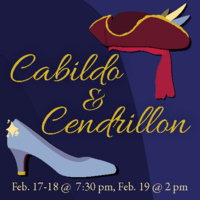 Cabildo tells the story of a group of tourists, including the newlyweds Mary and Torn, who tour the cell where the notorious pirate, Pierre Lafitte, was imprisoned during the War of 1812. The Barker tells the story of Pierre and his beloved Lady Valerie, then leads the group to another part of the Cabildo. Tom and Mary, however, linger in the cell to sing of their happiness. Tom rejoins the tour group while Mary remains, pondering the means of Pierre's escape. She falls asleep and dreams the answer.

Cendrillon is a retelling of the Cinderella story full of wit and charm. The plot remains relatively faithful to Perrault's original fairy tale, but takes a much more lighthearted approach than the other operatic adaptations The evil stepmother is replaced with a bumbling and clueless stepfather and the Fairy Godmother actually appears as a guest at the party and entertains the guests with a song.