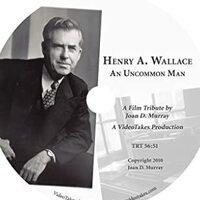 Screening of "Henry A. Wallace: An Uncommon Man"

In conjunction with the Culver Lecture by John Nichols, the Culver Public Policy Center is hosting a screening of Joan D. Murray's 2011 film tribute to her grandfather, Henry A. Wallace: An Uncommon Man. The film will be introduced by David Wallace Murray, great-grandson of Henry A. Wallace.