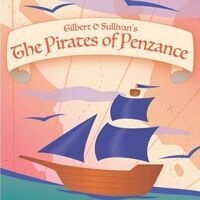 Set sail with a band of tender-hearted pirates, a modern Major-General, a bevy of Victorian maidens, and a bunch of bumbling British bobbies in Gilbert and Sullivan's musical comedy classic. Upon reaching the age of 21, Frederick, who was mistakenly apprenticed as a young boy to a band of pirates, falls head-over-heels for the Major-General's daughter and forswears the buccaneer's life forever. Or so he thinks.

Buy Tickets
This event content is powered by the Localist Community Event Platform.